Footnotes and Endnotes with InDesign…

Received an email today in which the following question was asked:

What does this mean for publishers who are placing manuscript text set in Microsoft Word containing footnotes or endnotes into InDesign?

When we display the Import Options during Word document import (File > Place) we can import both footnotes and endnotes:

Regardless of how you import the styles and formatting from Word, it is a good idea to set-up a character style for the footnote reference text and a paragraph style for the footnote text. If you opt to import Styles and Formatting from Text and Tables on the fly from Word, you’ll end-up with two styles you can use immediately: a Paragraph Style called Footnote text and a Character style called Footnote reference. 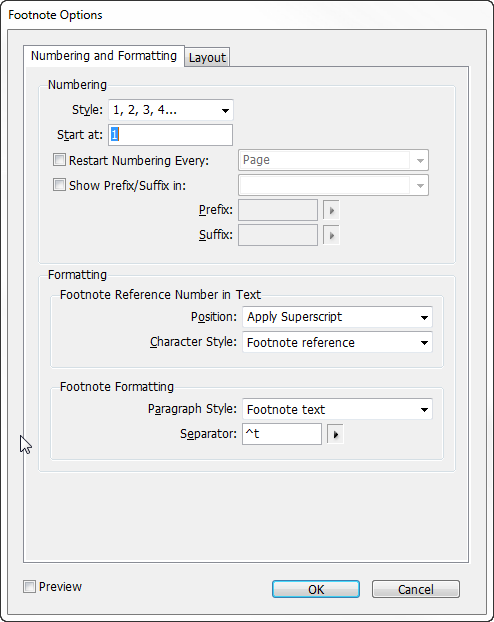 Note: Although the document footnote options for an InDesign document can reset footnote numbering based on Page, Spread or Section. Each individual story will always cause a footnote numbering reset. In other words for continuous footnote numbering within a chapter (Section), you’d need to ensure all text frames within the chapter are threaded. Rorohiko has developed a nice tool for InDesign that can help you thread text frames for this purpose: http://www.rorohiko.com/wordpress/indesign-downloads/textstitch/

Endnotes import as static endnotes. I’d opt to import Styles and Formatting from Text and Tables on the fly from Word, as all endnote references — including those inserted in tables— will have the Endnote reference Character style applied to it. A  Paragraph Style called Endnote text is applied to the endnote text at the end of the story.

Story: a series of threaded text frames in InDesign. 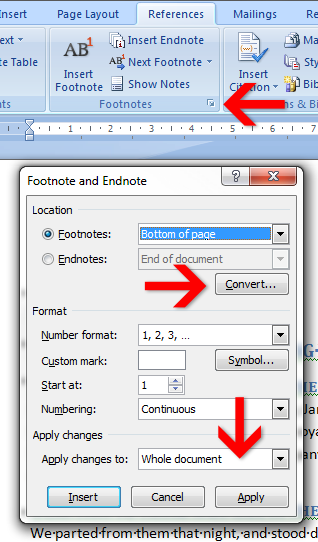 Keep in mind however, that there are limitations as to where footnote references are supported in InDesign. If endnotes appear in tables in Word and are converted to footnotes in Word, they will be ignored during the document import into InDesign.

I am not aware of any script that’s out there that performs this conversion from static endnotes to dynamic footnotes in InDesign. But could very well be overlooking a script. Let me know if there is a script that does this in InDesign. I’d gladly add the details to this post.

As to conversion of static endnotes to dynamic endnotes…  This is an easier question to this answer. Peter Kahrel developed an excellent free script for InDesign that does just that.  Ok, it doesn’t quite add a true dynamic endnote feature to InDesign, but the script builds InDesign cross-references based on the paragraph and character style information the document contains, when a paragarph style is applied to endnote text and a character style is applied to the  endnote reference. Creating cross-references means that the link between endnote reference and text does become dynamic. Which makes it a script that is very useful in the interactive PDF and EPUB arena.

You can read further instructions on how it to install and use the script on Peter’s web-site:

If what you are looking for is a solution that adds better support for Microsoft Word endnotes in InDesign, then there is a commercial plug-in available  as well: Sonar Bookends InFnote from Virginia Systems. You basically place a Word document including the Endnotes into InDesing,  then run an Import Word Endnote command and place the endnotes in a separate InDesign text frame (no longer attached to the story) and update the numbering.

You can download demo version of the script that includes the user manual from the Virginia Systems web-site: