GREP it vertically in InDesign

“How do I set vertical type in InDesign?” was a question that landed in my email box today. In all honesty, setting vertical type in InDesign does require the opening of ‘the box of tricks’. I’m writing this tip in two parts. The first part (found below) will show you a pretty quick and dirty method you can apply just using InDesign. The second part will look at integration between InDesign and Illustrator.

For those of you that only have a copy of Adobe InDesign, the following tip provides you with a pretty quick and easy way to set vertical type.

First we’ll start by creating a Text Frame that has our soon to be vertical text set in it. For the best result, set the text alignment to Align Centre. 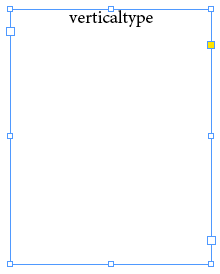 Now that we have the text frame with our text on the page. We’re ready to convert this to Vertical Text.

The work-around I choose to use for this is the insertion of a ‘Forced Line Break” … that’s hard work!!! Imagine having to manually press Shift+Return/Enter after each character… surely there must be a quick way to do this?
Oooh yeah… there is… We’ll be using a super-duper quick GREP Find/Change for this.

I’m using the GREP option here, because it allows us to search for every individual character in the selected text frame (Story) and say .. “now go and put a forced line break behind it”…

Click the metacharacter menu on the right of the Find what part of the dialog. Metacharacters incidentally are characters that have a special meaning in InDesign.

We’re looking really for any type of character, so let’s choose Wildcards > Any Character.

This adds a single full-stop in the Find what field in the dialog box. Super. 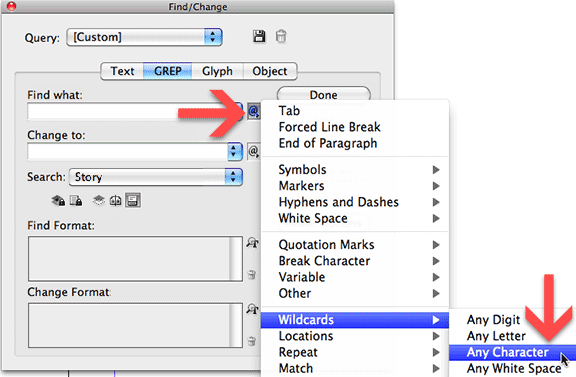 Now on to changing things… What we need to do is put the originally found text back AND add a forced line break behind it. So here we go.

From the metacharacter menu on the right of Change to, choose Found > Found Text. This adds a $0 in the Change to field. 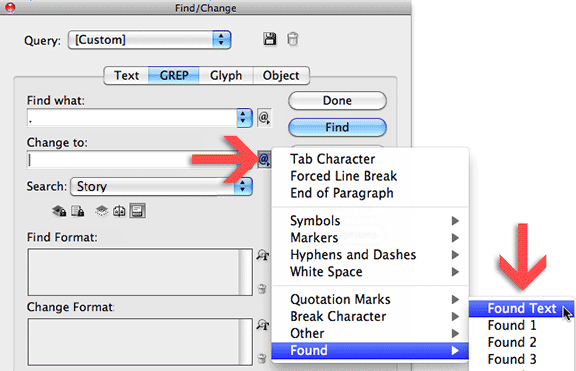 Next from the same menu choose Forced Line Break. This adds \n to the Change to field. 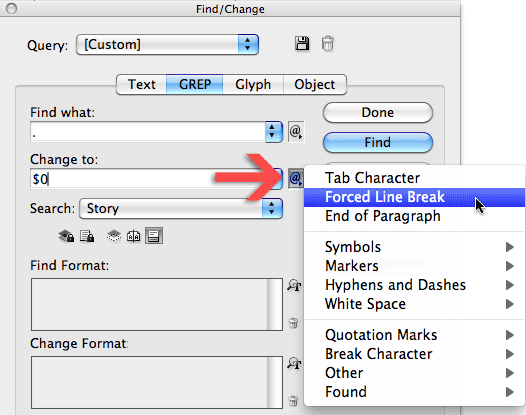 Before we do anything else, ensure the Text Frame is selected, and set the Search option to Story. Then click the Change All button.

Changing the space between characters

In one quick hit, the text will appear Vertically (in reality the text is now broken over a number of lines). 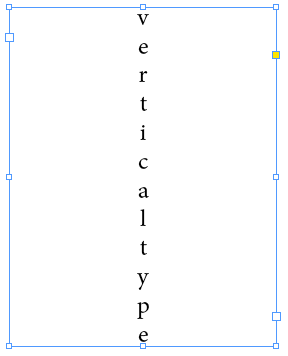 To control the spacing between the characters, either alter the Leading for the text, or set the Vertical Justification to Align Justified (Object > Text Frame Options). 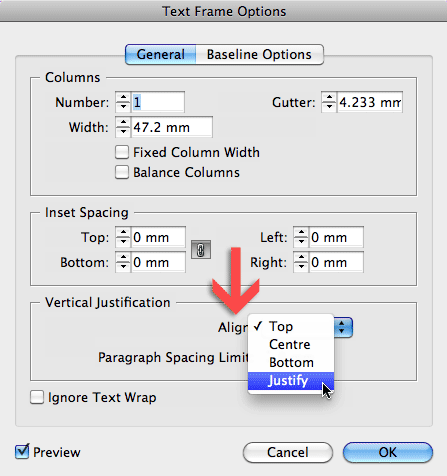 The latter provides you with a nice click and drag method to expand the height of the text frame and automatically insert more space between the characters.

For some alternate approaches you can also refer to David Blatner’s post on the InDesign Secrets blog. A very nice article outlining another couple of InDesign vertical type methods.

InDesign: Bridging that gap with the gap tool
Vertical Type from Illustrator to InDesign