Figures in InDesign CS5.5 and Accessibility

After reading David’s blog-post on InDesign Secrets, titled “Building an Org Chart or Flowchart in InDesign“.  I thought… “How does building illustrations in InDesign impact the development of Accessible PDF with InDesign CS5.5?”

InDesign CS5.5 introduced significant new features for EPUB/HTML and PDF export. Building Accessible PDFs is now much, MUCH easier… It’s not yet perfect and we’ll still need to do some extra work in Adobe Acrobat X, but overall the delivery of an Accessible PDF is a lot less time-consuming than it would have been in working in InDesign CS5.

So I spend a few minutes testing what happens with figures created in InDesign CS5.5 (7.5.2) when we are building Accessible PDFs. In all cases Object Export Options was set to Apply Tag Based On Object, and Alt Text Source set to Custom (in Alt Text and Tagged PDF tab), and ensured ‘Create Tagged PDF‘ option was selected during PDF Export. 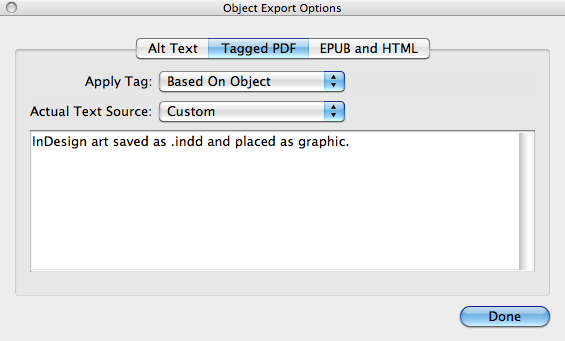 Below are this morning’s findings.

Building a chart in InDesign, and Grouping the artwork together.

So then I thought I’d be clever and build the InDesign chart in a separate InDesign document, and place this into the InDesign file that’s turned into an Accessible PDF:

I then rebuild the InDesign chart in Illustrator and ran same three scenarios (independently placed, inline and anchored).

In Summary, using InDesign artwork for diagrams/charts presently means extra work in Acrobat X to ensure the PDFs generated from the InDesign file are Accessible.