This is the fourth and final blog-posts in a series of posts on lookaheads and lookbehinds in GREP, written after speaking at the Perth InDesign User Group. My speaker notes are also available: What is GREP? (PDF download) (2.4Mb). In the previous three posts I briefly introduced GREP, and we took a look at Positive Lookahead, Negative Lookahead and Positive Lookbehind. In this post we’ll review the Negative Lookbehind.

To understand what a negative lookbehind is, imagine yourself standing on top of that particular bit of text you want to change. Put your back to the start of the sentence you are in and look behind you… what are you expecting not to find there?

In the example below you are looking at finding a number when it does not have a dollar sign behind it. 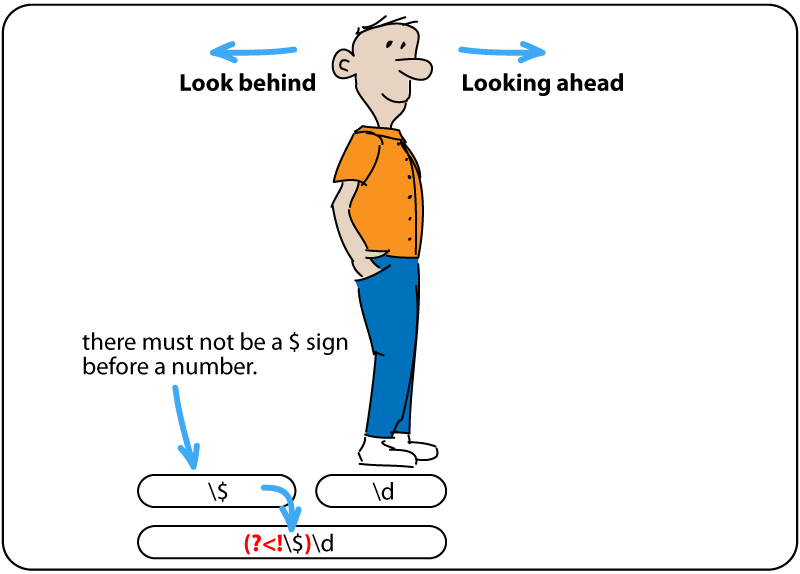 Step into the sentence and onto the number(s) you are looking for.

Let’s apply a GREP style that highlights any number (digit) in pink first. To showcase how the GREP style applies I’ve created a character style that applies pink colour to the text. 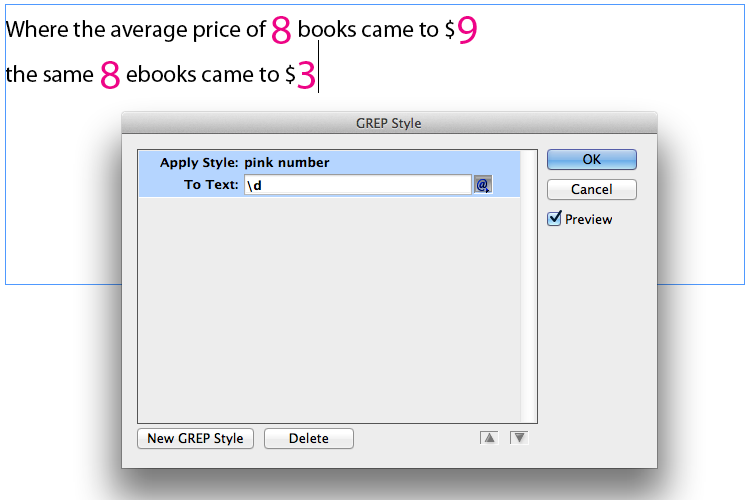 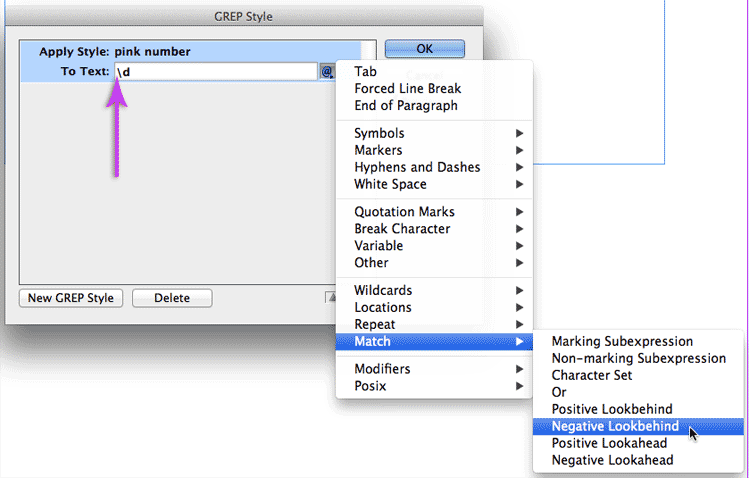 The To Text area now displays: (?<!)\d. Next we need to insert the text that you do not want to locate behind the number ((?<!)\d) that you’re imagining yourself standing on. 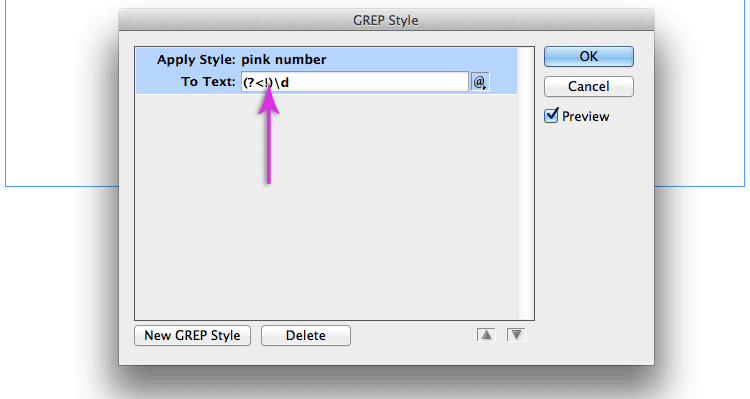 We have completed our Negative Lookbehind at this stage. 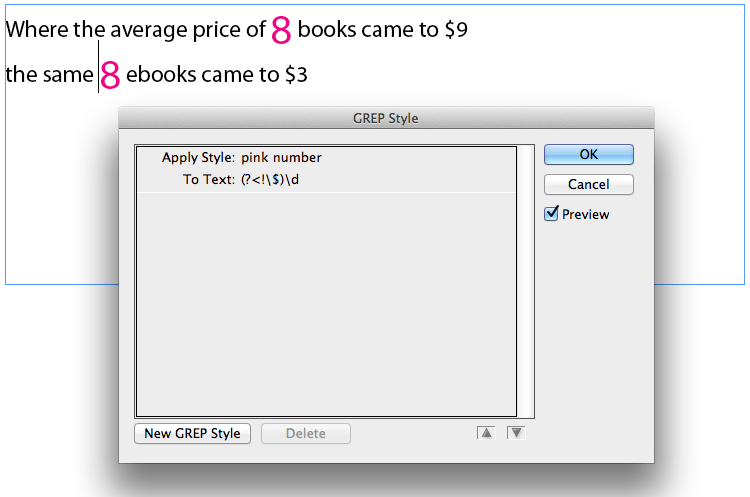 Although the previous example gives a good usage of the Negative Lookbehind, there are scenarios where you’d need to ‘GREP’ a little further 🙂 For example what happens of there are double digit numbers involved? 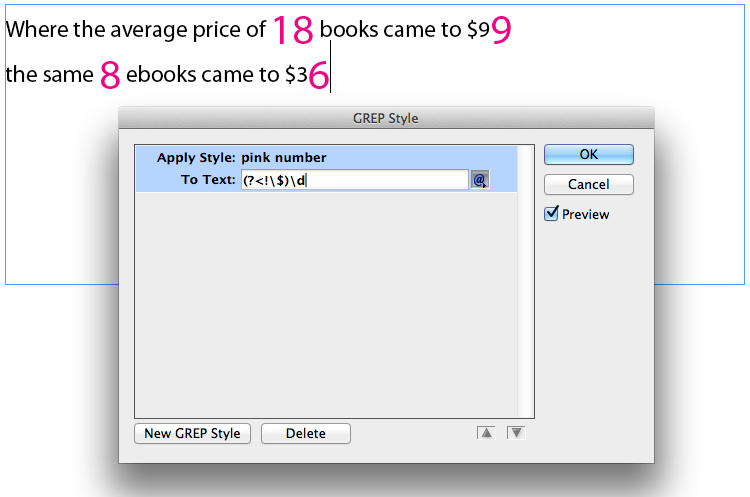 The thing to do at this stage is to further isolate the ‘pattern’ of text… We need to find those numbers not preceded by a $-sign, another criteria we have is that those numbers appear at a word boundary… Words consist of alphanumerical (a-z, A-Z, 0-9 and _) character.

We originally inserted a Wildcard > Any Digit \d in the To Text area. To expand this to the GREP picking up any number (single, double or any other number of digits): 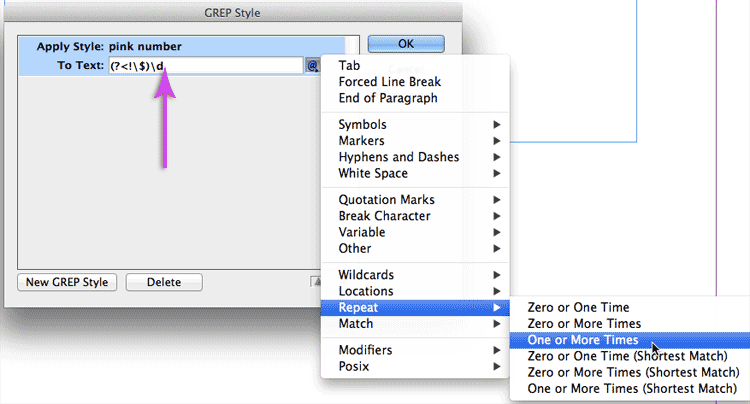 Next to isolate the GREP further we refine it to look for numbers not preceded by a dollar sign from the word boundary (or start of word). 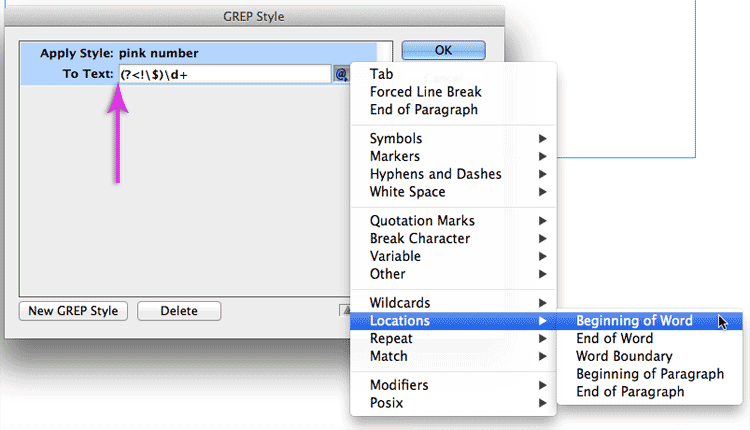 The To Text area now displays: \<(?<!\$)\d. And the problem of the multiple digit numbers is solved.

You’ve hopefully learned how the various lookaheads and lookbehinds in GREP work.

Going forward, try and combine the lookahead/behinds. If you have a cool combination you’d like to share with the world. Feel free to add a comment at the bottom of the posts.