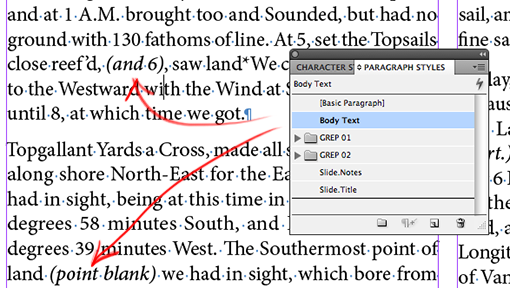 InDesign CS3 introduced the ability to perform GREP Find/Changes, making it easier for us to apply character styles to text pattern strings such as ‘all text’ between parentheses.  InDesign CS4 continued the “GREP-theme’ through its  ability to lock this pattern based application of character styles into your Paragraph Styles.

The following tutorial is part of a 4-part series on GREP Styles.

Part 2: Change the appearance of numbers (figures) within a given paragraph style

In this first tutorial we start with a simple GREP style tutorial that looks at how we can automatically apply a character style to all text between parentheses.

All of the paragraphs for which the text between parenthesis must be set in Italic have already had a Paragraph Style “Body Text” applied to it.

To define a Character Style: Highlight some text in the Body Text paragraphs and change its formatting. I’ve changed the Font Style to Medium Italic. 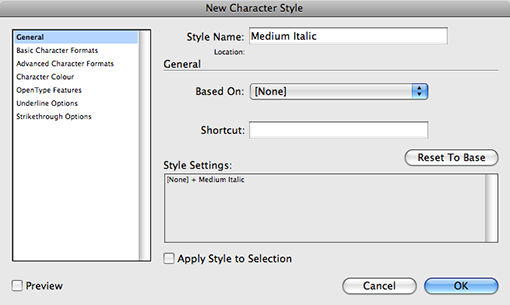 Click OK to add the style to the Control Panel. I’m purposely not clicking “Apply Style to Selection’, as the text I formatted with Medium Italic is only used as the basis for the Character Style definition.

It is now time to add the GREP Style to our Paragraph Style. 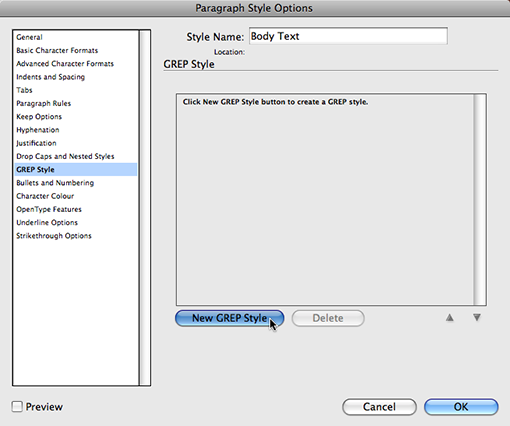 The Character Style we want to apply is “Medium Italic”.

Oops did you forget to create the Character Style? Don’t worry, from InDesign CS4, you have the ability to create your Character Style right here in the Paragraph Style Options dialog. Have a look at the bottom of the Apply Style pop-up and notice the “New Character Style”.

Our Open Parenthesis Character is part of the Symbols group.

As you select this component, you might notice that the text entered in the To Text field is now set to \(.  Certain symbols are reserved by GREP for particular expression components. The Parenthesis form part of this group of characters. For our GREP Expression to recognise the  “(” as a literal character it must be preceded by a “\” character. This “\” is referred to as an Escape Character.

If you want to use these characters as a literal character in a GREP expression, you must escape them with the “\”.

Next we’re after our next part of the expression: The any text or words etc. that are inserted prior to the closing parenthesis.

When you are looking for ANYTHING… Think of the fact that you know that this ANYTHING might be an “a” or a “b” or really any character of the alphabet, and even numbers or spaces.

Wildcards are a way of defining an “ANYTHING”.  And as we’re looking for any type of character, not just Digits (numbers), Letters (alphabetical) or White Space (spaces), we’re choosing Wildcards > Any Character. 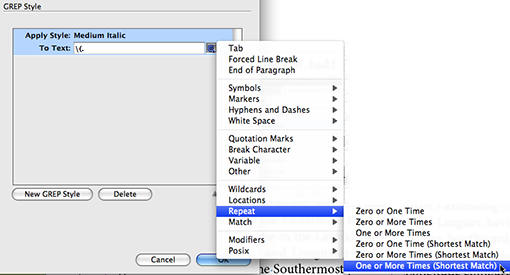 A “.” is added to the GREP expression.

Let’s assume we don’t encounter “()” (without text between the parentheses). So we’re looking at One or More occurrences.

So let’s choose Repeat > One or More Times (Shortest Match).  This adds “+?” to the expression.

We’re almost there at this stage. All we need to add to our expression now is the Closing Parenthesis character. We jump back to Symbols for that one.

Any text between brackets is now set using our GREP style. Click OK to apply the GREP style to the Paragraph Style and see the finished result.