This is the second in a series of four short GREP Style tutorials.

Part 1: Automatically apply a character style to all text between parentheses

In this second tutorial we look at how we can use a GREP style to change the appearance of any figures within a paragraph style.

Task for this GREP Style is that it changes the formatting on any numerical characters (figures) throughout the Body Text paragraph style.

We’re starting the same way once again. By creating a Character Style that sets the formatting for the figures.

As I’m using a Open Type font in this example (Minion Pro). I can use OpenType features for figure formatting. Kind of cool.

To create a Character Style that has my figure settings included, I start by highlighting a figure and from the Control Panel menu choose OpenType.

There’s much more to OpenType then just being a cross-platform font. As these fonts are double byte fonts they can contain an expanded character set and provide cool typographical features.  Adobe Systems Inc. has a good OpenType Q&A page available as part of their Open Type ‘branch’ on their web-site

I’m a fan of Proportional Oldstyle, I like the smaller font size. 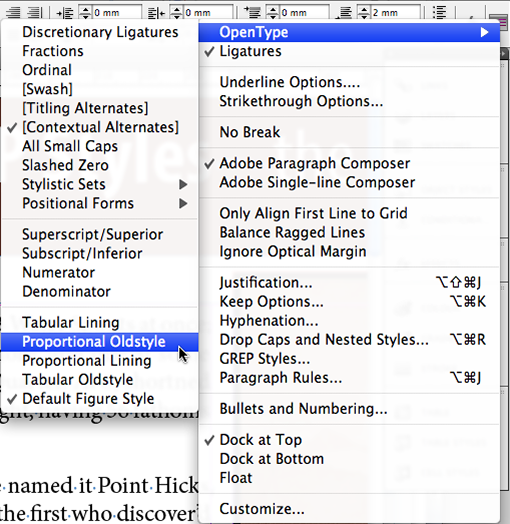 Click OK to add the style to the Character Styles panel.

From the Paragraph Styles panel, right-click “Body Text” (or the style that you want to edit) and choose Edit “Body Text”. 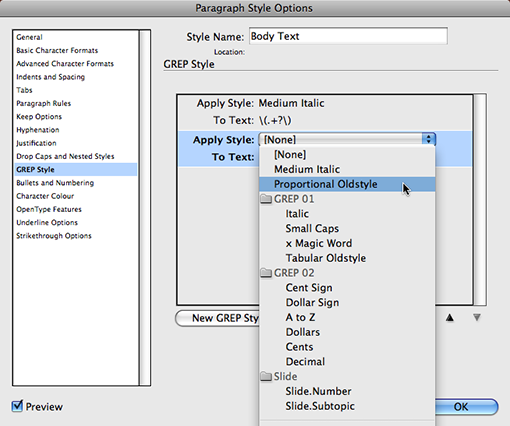 Choose the “Proportional Oldstyle” Character Style from the Apply Style list. And believe it or not you’re done.

That’s because the default expression that InDesign inserts is “Any Digit, One or More times”. But let’s imagine your setting the expression anyway 🙂

Clear the field data in To Text. Then from the Special Characters for Search pop-up choose: Wildcards > Any Character